Working With The
Peter Jones Foundation 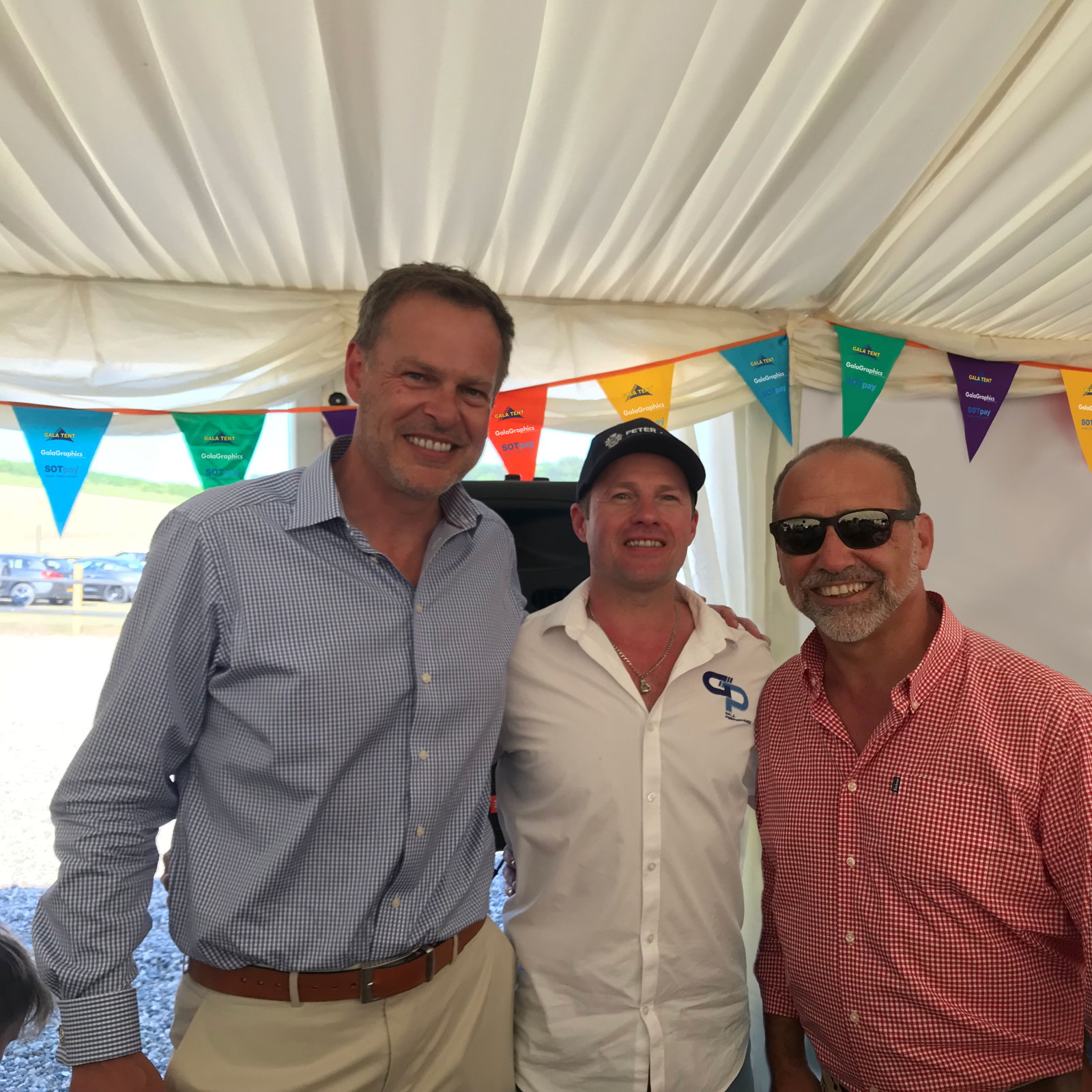 Gala Tent`s branding and print division Gala Graphics, based in the Dearne Valley designed and printed gaze-bos, pop up banners and feather flags for the event, which was held at The Royal Berkshire Shooting School in Reading and attended by over 100 delegates. The event included a clay pigeon shooting competition, followed by champagne reception and auction of a number of ‘money can’t buy’ gifts to raise funds for the charity.

Glen Robinson, Managing Director of Gala Graphics, said: “It was fantastic to see our gazebos, banners and flags and to be involved with such a high profile event that does so much good for young people.”

Jason Mace, Managing Director of Gala Tent, said: “It was a real privilege to sponsor this event which raised so much money for Enterprise Education. I am passionate about helping the next generation of entrepreneurs and working with the Peter Jones Enterprise Academy at Sheffield College was something I have found really rewarding. There are some very enterprising young people in South Yorkshire and the Diploma gives them an even better chance to achieve their dream of running a successful business.”

Over the past seven years, Gala Tent has set challenges for students to create a new marquee and gazebo product range and Jason Mace gave them the benefit of mentoring and coaching to encourage their entrepre-neurial skills.

Gala Tent, based in South Yorkshire, is the UK’s largest supplier of marquees and gazebos, exporting across Europe and to the US. The company designs and manufactures a wide variety of solutions to suit both large and more compact garden and patio areas. All products are quick and simple to erect and are designed to withstand the worst of the British weather, with selected products tested to withstand up to 80 mph winds.

Founded in 1999, Gala Tent now sells over 15,000 tents and marquees each year, along with around 90,000 event accessories and furniture products in the UK. Gala Tent is a preferred supplier for organisations including the military, NHS, the South Yorkshire Fire & Rescue Service, South Yorkshire Police Service, St John’s Ambulance and AA, as well as to thousands of homeowners nationally.

Fast-growing Rotherham company, Gala Tent Ltd has set the next generation of entrepreneurs a challenge to design new products that could be added to the marquee specialist's range. 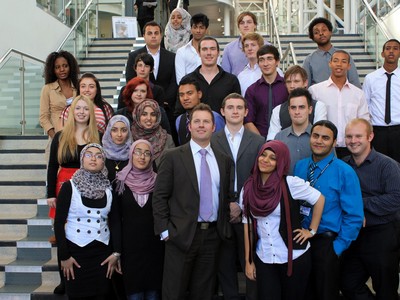 Jason Mace, managing director of Gala Tent Ltd, recently launched the project at the Peter Jones Enterprise Academy at Sheffield City College. It will see small groups of level 3 students creating brand new products to be chosen to be added to the Gala Tent range. Students will benefit from the business experience and expertise of Jason and other mentors throughout the five weeks given to create the product design.

Jason said: "This is such a great scheme which I am very excited to be involved with. I can remember how hard it was for me as a young aspiring entrepreneur and want to use my own knowledge and experiences in business to help these students and hopefully make great new products together."

The product designs will be pitched to an expert panel including Jason in November where the best two will have a prototype made and a marketing strategy put into place. The final chosen product will be put into mass production alongside other Gala Tent products with 5% of the overall profit made going to the winning team of students.

Gala Tent has grown from a table top operation in Grimethorpe to a company with a turnover in excess of £5m in just over a decade. The company is the UK's largest supplier of marquees and gazebos, exporting across Europe and to the US. They moved into new headquarters at Fairfield Park in Manvers earlier this year. 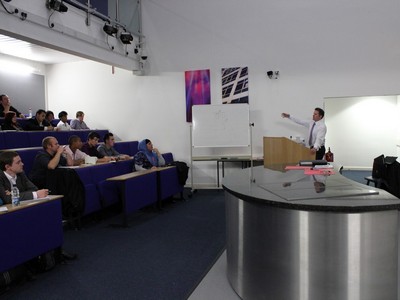 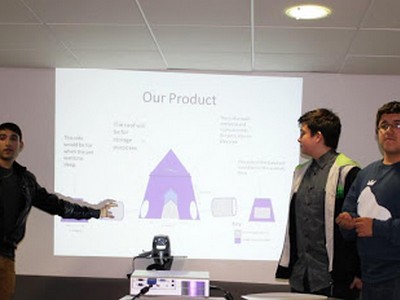 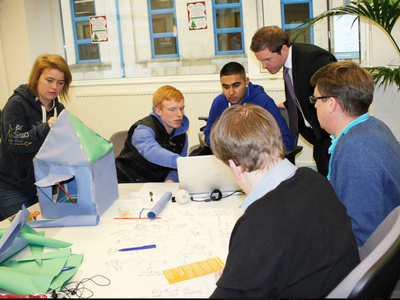 Phase 2 of the Gala Tent and Peter Jones Enterprise Academy project kicked off triumphantly as students came up with great novel and innovative product ideas. 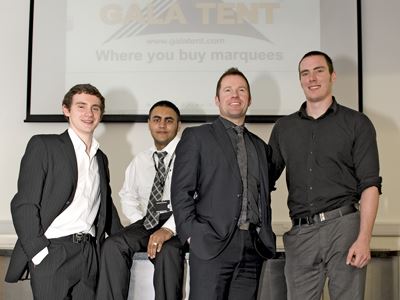 The project involves small groups of students creating brand new products to be chosen to be added to the Gala Tent product range, with the benefit of Jason Mace’s as well as other mentors business experience and expertise.

6 different groups of students including Pop Away and Pop it Rocket to name a few demonstrated their product ideas via onscreen presentations and miniature models in Sheffield City College’s lecture theatre. Lots of feedback and constructive criticism was given to each group with the added invitation for extra support.

Jason Mace, who recently received the Barnsley and Rotherham Entrepreneur of the Year Business Award was very excited about the potential new products that he could bring to Gala Tent, “I didn’t know what to expect from these kids but I was very pleasantly surprised with the innovative ideas they came up with. They had thought of everything including the potential market, storage and transportation of the goods. They may have discovered an untapped market which I hope can be made into a best seller”.

The product proposals were delivered on Wednesday 9th November at Sheffield City College with the next meeting to decide which products will be sent for manufacture on Wednesday 7th December. Giving the students the chance to perfect their sales pitches and create a workable model.

The managing director of Gala Tent, which supplies commercial marquees, tents and gazebos, has been working with students from the Peter Jones Enterprise Academy (PJEA) to create a brand new product. 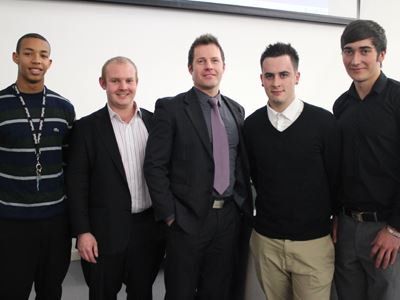 The products are a result of a project launched in partnership with PJEA and Gala Tent which started in September incorporating a Dragons’ Den style set up with Jason Mace, managing director of Rotherham-based Gala Tent, and other professionals.

One of the judges on the panel, Karl Kent, business bank manager at RBS, said: “It has been great to see the enthusiasm and interest that the project has created. The groups have worked really hard to come up with an innovative idea and I believe some of them have achieved this. It will be great to see the design come to reality”.

At this stage of the project the original six groups have been shortlisted down to three.

The next step for the students is to have consultations with professional product developers to create working models to be sent for manufacture.

The project finale will be held at Gala Tent headquarters based in Manvers in the new year when each team will be presented with their finished product and the overall winner announced.

The students whose product is chosen will then receive five per cent of the profits made when Gala Tent mass produce and include it in their product range.

Gala Tent, which started life as a table top business in September 1999, is now situated in a 53,000 sq ft unit with an annual turnover of over £5m.

The PJEA was founded by entrepreneur and star of Dragons’ Den, Peter Jones, with a view to encouraging more entrepreneurial activity within the UK. 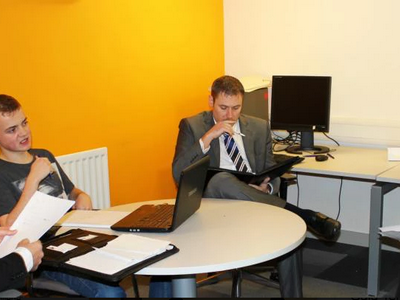 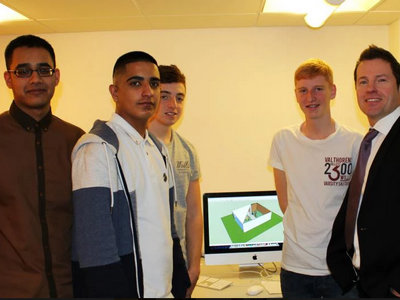